Your immune system is no longer able to fight off pathogens effectively because of HIV. So you can get infections. Someone who doesn't have HIV can fight off those infections, no problem. With HIV this is no longer possible, unless you take HIV medication.

There are different ways of contracting HIV. Read more here about how HIV can be transmitted.

When a person contracts HIV, the initial infection is acute and this later changes into a chronic infection. An HIV infection is a serious, but easily treated, condition. If left untreated, HIV can lead to AIDS. Read more here about AIDS.

With proper HIV treatment, your life can be as long and as healthy as someone without HIV. About half of the people with HIV rate their health as being good to excellent. Less than one in ten rates their health as being very poor. Also, the life expectancy of people in the Netherlands with HIV is the same as people without HIV. To stay healthy, it is important that you do not wait too long before you start using HIV medication, and that you take it on time every day.

There is a lot to deal with when you are told you have HIV. You will have to make decisions like: who do you tell the news to, how do you handle sex, what do the blood results mean, and how do you stay healthy? Above all, take your time to get used to the new situation.

The body’s defence system (also known as the immune system) protects the body from infection by invading microorganisms, such as bacteria and viruses. When viruses or bacteria start to grow at the expense of your body, and damage your body's cells as a result, we call this an infection.

For this defence to operate properly, it is essential that the immune cells recognise the pathogens, and spring into action to render them harmless. It is a complex defence system of cells that communicate with each other and give each other commands. The immune system is constantly working on this, even though we don't notice it. The immune system is able to render most infections harmless, but unfortunately it cannot do that with HIV.

When your body comes into contact with a pathogen, your immune system reacts to it. White blood cells (also called leukocytes), antibodies, and certain immunological agents provide the defence. Out of these white blood cells, the T-helper cells (these are CD4 cells) are the ones that direct the operation. T cells activate the rest of the immune system when needed. But the HIV virus can invade CD4 cells, and T cells are CD4 cells. This disrupts the immune system. CD4 cells are not only found in the blood, but also in the lymph nodes and in all other tissues in your body. If you don't treat the HIV infection with medication, the CD4 count in the blood can drop sharply. This puts you at risk of serious infections.

When you get a viral infection, the immune system produces antibodies to protect your body. Blood tests can show the presence of antibodies, which indicates that an infection has occurred. Your body produces antibodies when confronted with HIV. If an HIV test detects these antibodies in your blood, that means you are HIV-positive. Even when the virus in your body is unmeasurable after taking medication, the HIV test will still be positive: the antibodies are still there.

The course of an HIV infection 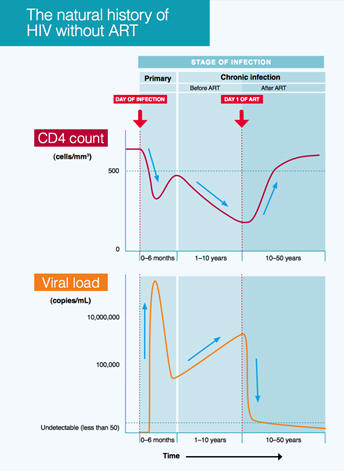 Your body does not know how to react in the immediate aftermath of being infected. This phase is called the acute or primary infection. This is the initial timeframe (0-6 months) in the example in the illustration above. HIV is free to undermine your immune system without it fighting back. The number of immune cells (CD4 cells) then begins to drop. The consequences are that your defences weaken rapidly and you become sick. Your immune system needs time to learn how to deal with HIV, and the number of immune cells will rise again after a while.

During the acute phase, you may experience the following: flu-like symptoms, sore throat, fever, general malaise, rashes, headaches behind the eyes, and swollen lymph nodes. Not everybody gets these symptoms, and they could also be caused by a flu. If you experience symptoms or indications of disease, do not hesitate to go to your general practitioner, or the GGD (Municipal Health Service). They can give you more information, and possibly offer you an HIV test. Read more here about testing for HIV.

By the time the acute or primary HIV infection is over, your body will have learnt to deal with HIV. You then have a chronic infection. This is the second timeframe (1-10 years) in the example in the illustration. Your immune system is clearing out the infected cells and making antibodies to prevent HIV from infecting more cells. Your immune system recovers, your symptoms disappear, and you start to feel better. However, HIV is almost always stronger than your defences, unless you take medication. The result is that your immune system gets weaker over time. This means you are more susceptible to all kinds of infections. This process varies from person to person as well. Some people still feel healthy years after contracting HIV, others get sick quite soon.

In the third timeframe in the example in the illustration (10-50 years), the person has a chronic infection and is taking HIV medication. Medication helps the immune system to keep the virus suppressed. This means the immune system does not have to work as hard, and the person will not get AIDS. So HIV is a disease that is easy to treat. The earlier you start taking HIV medication, the smaller the chance of complications later on. And when someone with a chronic infection takes medication, the virus is so well suppressed that it cannot be passed on through sex. 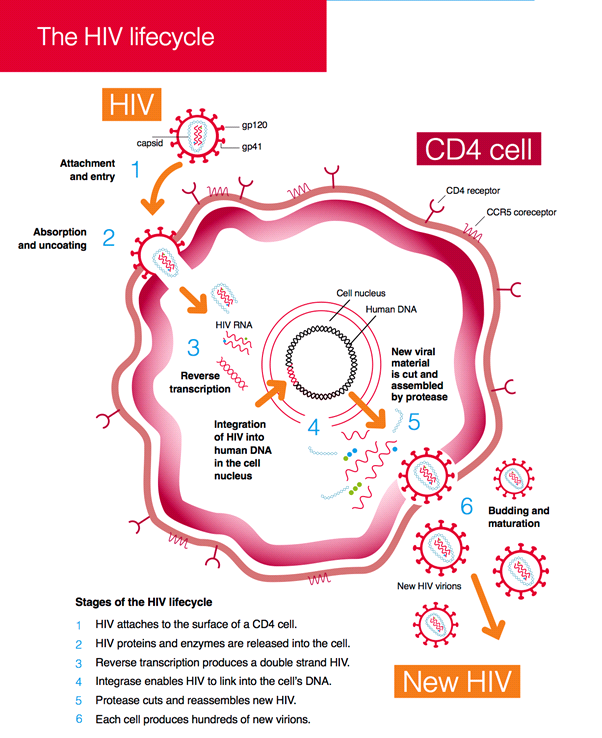 HIV infects white blood cells that have a CD4 receptor. Examples of this are T-helper cells and macrophages. A T-helper cell is the director of the immune system, controlling other immune cells. A macrophage is a cell that clears out dead cells.

HIV is a retrovirus. Retroviruses have RNA instead of DNA. DNA and RNA are genetic materials that record a cell’s function. HIV penetrates human cells, converts its own RNA into DNA and incorporates it into the human DNA. This allows HIV to replicate itself inside a human cell. This is what makes it so difficult to find a cure for HIV. There are other retroviruses as well as HIV.

The CD4 receptor is a kind of lock that a key will fit into. HIV needs this white blood cell lock and a key of its own to penetrate the cell. The lock consists of the CD4-receptor and the CCR5 (in T-helper cells), or the CXCR4 co-receptor (in macrophages). The key is a protein on the cell wall of the HIV, the protein is called gp120. HIV also needs the gp41 protein to penetrate the cell.

HIV uses the following steps to replicate itself in the human body:

Click here to read more about how HIV medication intervenes in the replication and suppresses the virus.

The amount of virus in the body is called the viral load. The viral load indicates how much HIV RNA is in the body. The viral load can be anything from several million to so low that it is impossible to determine the number. We call this unmeasurable (undetectable). Usually it is less than 50, sometimes the measurement limit is even lower or slightly higher. When the viral load is suppressed (less than 200 copies/ml) there is very little virus in the body and HIV cannot be transmitted through sex. We call this undetectable = untransmittable. You can read more about it in the U=U dossier (in Dutch: n=n).

Around 1% of people with HIV are elite controllers. Elite controllers are a subgroup of the long-term non-progressors. These people retain an undetectable virus for a few years, and sometimes for decades. HIV medication is also recommended for these people because you have no idea when the viral load will start to rise.

Less than 1% of the world’s population is immune to HIV. This is usually because these people do not have a CCR5 co-receptor on their CD4 cells. This is also called the delta 32 mutation or the CCR5-Δ32 mutation. Research is being done to see if people without this mutation can also be made immune to HIV by artificially introducing a mutation. Read more here about this type of research.

When we talk about HIV, we are almost always talking about an HIV-1 infection. Around 95% of people with HIV have HIV-1. But there is also HIV-2, another retrovirus. HIV-1 and HIV-2 are very similar, but with a few differences. At the hospital, the doctor or nurse will tell you if you have an HIV-2 instead of an HIV-1 infection.

HIV-2 is mainly found in west Africa, and is very rare in America, Europe and Asia. In addition, HIV-2 seems to be more difficult to transmit than HIV-1. The routes of transmission are the same as for HIV-1. Not all HIV tests detect HIV-2, but the most commonly used combination test in the Netherlands will also detect an HIV-2 infection.

Typ your question in the box below