There are many different types of HIV medication, and new HIV medicines are being developed all the time. The current medication is effective and safe. However, some people suffer from side effects, so switching to a different medication may be a good idea.

There are various classes and combinations of HIV medication available. So there is a medication to suit everyone. Sometimes it takes a while to find out which medication is the best fit, and a switch may be necessary. Talk to your doctor or nurse if you want to switch, so that you can find the right medication for you. HIV medication keeps the virus suppressed, so you can't transmit HIV.

Types of HIV medication in the Netherlands

There are several names for each HIV medication. A drug has a chemical name that is written with a lowercase letter, and falls into a class. Besides the name of the class and the name of the chemical, the drug also has a brand name that is written with a capital letter: e.g. Stocrin. The brand name can vary from country to country, Stocrin is called Sustiva in some countries, for example. The active ingredient in Stocrin is efavirenz, in the class non-nucleoside reverse transcriptase inhibitors (NNRTIs).

When the drug is still being researched, it often only has a code name. The code name gets changed to a chemical name during the research, later on it gets a brand name. Medication can’t be marketed in the Netherlands until it has been licensed by the CBG (Medicines Evaluation Board). Read more about research into new HIV medication here. New drugs also appear in updates on de medische blog (in Dutch).

These HIV medications are available in the Netherlands

One pill a day

A number of commonly used combinations of antiretroviral drugs are now available in a so-called combination therapy: several active ingredients brought together in one pill. In 2006, a pill combining three active ingredients, constituting the entire treatment, came on the market for the first time: the single-tablet regimen (STR). Since 2019, ten of these single-tablet regimens have been available, meaning that a large proportion of people living with HIV only need to take one pill a day.

The first combination pill came on the market in the late 1990s. This combined two nucleoside/nucleotide transcriptase inhibitors (NRTIs). Two NRTIs are also called the backbone: this is often the basis of treatment. In addition to the backbone, a pill from a different class is used.

Since 2018, there has been a single-tablet regimen consisting of two rather than three active ingredients. For many years it was thought that three active ingredients where necessary to keep the virus suppressed, but it turns out this is also possible with two substances in certain combinations. Further research into this is currently underway.

What does HIV medication cost?

HIV medication is relatively expensive because it almost always involves a combination of at least three drugs. Treatment with HIV medication costs on average just under €1,000 a month. Because HIV medication was developed relatively recently, many of them still have patents. A small number of drugs are now on the market in generic (non-patented) versions, which has lowered the price of these medicines. The health insurers in the Netherlands reimburse the costs of all officially registered combination therapies.

How does HIV medication work?

HIV medication suppresses the HIV virus in a number of steps. The most commonly used combinations suppress the virus at two different stages. This is usually by inhibiting the enzyme (protein) reverse transcriptase, plus an additional step. This might be by inhibiting the enzymes protease and integrase. Inhibiting these enzymes prevents the formation of new HIV RNA, by preventing the slicing of viral proteins. Other HIV medication prevents HIV from entering cells, preventing the infection of new cells. 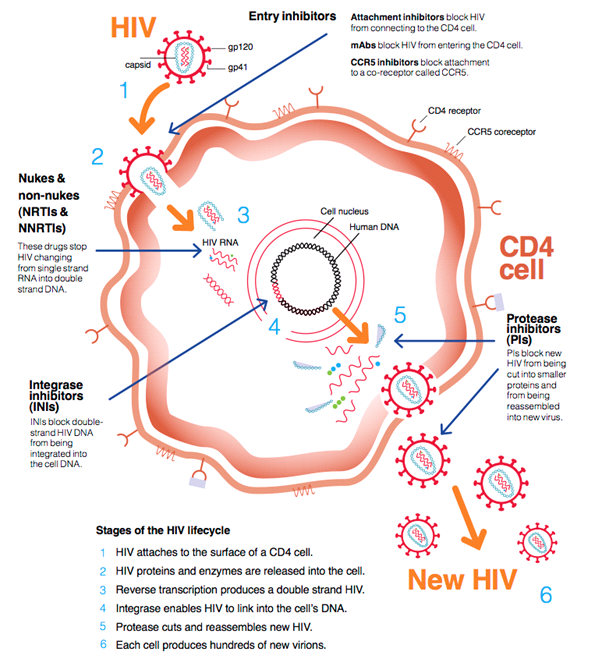 INI stands for integrase Inhibitor. The enzyme integrase allows HIV to replicate. Integrase inserts DNA from the virus into the DNA of the cell nucleus. There are two types of integrase inhibitors: integrase strand transfer inhibitors (INSTIs) and integrase binding inhibitors (INBIs). INSTIs are already in use; INBIs are still being researched.

Entry inhibitors are also called fusion inhibitors. To enter a cell, HIV must be able to bind to the receptors on the cell wall. First, the HIV gp120 glycoprotein binds to the CD4 receptor. Next, the gp120 glycoprotein binds to one of the two chemokine co-receptors CCR5 or CXCR4. Once HIV has attached itself to both the CD4 receptor and the co-receptor, the virus can enter the cell. An entry inhibitor is given as an injection and prevents HIV from binding to the CD4 cells.

A booster enhances the effect of HIV medication. The dosage of the HIV medication can then be reduced. Boosters may be given in a fixed-dose combination (they are in some single-pill regimens and backbones), or given separately. They were invented to enhance the action of protease inhibitors.

You determine the efficacy of HIV medication by measuring the viral load. The viral load represents the number of HIV particles per millilitre of blood. Within a few months of starting the combination therapy, the viral load should be below the measurable limit (= 50 copies/ml), and should stay under this limit. This is called an undetectable viral load.

If the viral load becomes detectable at a later stage, this indicates that resistance to the drug being used has developed, so it doesn't work properly anymore. The medicine is clearly no longer sufficiently effective. In that case one should consider taking a different combination, making resistance not an issue.

Checking the number of CD4 cells is becoming less important, and the number of CD4 cells is no longer measured twice a year in everyone. This used to be very important because the viral load couldn’t be measured then. Now we know that the CD4 cell count is not a good indicator of someone's overall health. There are people with low CD4 cell counts, who are perfectly healthy. Measuring the viral load tells you more about the status of the HIV infection.

Side effects and switching

A very small percentage of people with HIV have a virus that is resistant to one or more types of HIV medication. This can be caused by someone not taking their medication consistently, in which case they are not adhering to their treatment regime. Read more here about treatment adherence. Very occasionally someone gets infected with a virus that is already resistant. If you have contracted a resistant virus, your doctor will discuss this with you.

The main significance of having multiple classes of HIV medicine, is that cross resistance does not happen between the classes. Resistance to efavirenz is completely irrelevant to the effectiveness of nucleoside transcriptase inhibitors, protease inhibitors or entry inhibitors. Usually there are sufficient alternative HIV medicines available if a particular combination therapy fails.

The doctor uses resistance determination to find out whether HIV is resistant to one or more HIV medications, although this is not as simple as it seems. It’s apparently difficult to correctly interpret the results of resistance testing. Some of the tests do not look at whether the virus is actually resistant, but at the mutations (the changes in the virus) that cause the resistance. When the viral load is lower than 500 to 1000, then the resistance cannot be measured (= detected) and this also applies when only a small part of the HIV is resistant. In a similar situation the resistance results can be misleading.

HIV medication can have interactions with other medicines. This can influence the effectiveness and side effects of the medication.

There can be interactions between:

The interaction can go in two directions:

A few examples of interactions:

One aspect of HIV medication that is receiving increasing attention is the concept of preventive treatment. Ever since the discovery of effective HIV medication, researchers have suspected that suppressing the virus when treating people with HIV would also greatly reduce the extent to which they could transmit the virus. It was also discovered that HIV medication could be used to prevent someone from becoming infected.

TasP stands for Treatment as Prevention. In 2008, Swiss experts suggested that when people with HIV have been successfully treated – and they have a partner who doesn’t have HIV – they do not have to use a condom, subject to certain conditions. Since then, additional research in this field has been conducted, including the HPTN-052 study, the PARTNER1 study (2016 - in English), the Opposites Attract (2018 - in English) and the PARTNER2 study (2019 - in English).

We now know that people with HIV who have a suppressed virus cannot transmit HIV by having sex. We call this: undetectable = untransmittable. So treating people with HIV prevents transmission. And that is not only in the interest of the person with HIV, but also an important tool in fighting the epidemic and the stigma. That is why the Hiv Vereniging (Dutch Association of People with HIV), following the example of U=U, set up the campagne n=n (in Dutch). The message is the same – if the virus is not detectable you can't transmit HIV.

Pre-exposure prophylaxis (PrEP) can be taken to prevent someone contracting HIV. When used correctly (treatment adherence is very important), studies show its effectiveness to be more than 90%. In contrast to post-exposure prophylaxis (PEP), this is not a complete combination therapy, but a combination of two drugs. In Europe, the drug Truvada (tenofovir disoproxil + emtricitabine) has been registered for use as PrEP since 2016. PrEP is only available in some countries in Europe. There are two ongoing studies at the GGD (Municipal Health Centre) in Amsterdam, to look into the use of Truvada and Descovy as PrEP. Read more information on PrEPnu.

HIV medication is also used to prevent infection in people who are at increased risk. This use is called PEP (post-exposure prophylaxis). A PEP cure consists of full combination treatment for one month and should be started as soon as possible – the sooner the better, but no later than 72 hours – after exposure to HIV. Contact the GGD as soon as possible if you think you need PEP. Don't forget: someone with an undetectable virus cannot transmit HIV through sex or a needlestick injury. So PEP is only necessary if someone has an unknown or a high viral load.

When you get HIV, the virus multiplies rapidly in the body and the viral reservoir gets larger and larger. Several studies have shown that the sooner a person starts taking HIV medication, the smaller the reservoir remains. Read more here about the viral reservoir.

After temporary treatment with HIV medicine, some people with a small viral reservoir are able to suppress the virus for a longer period, without taking any more HIV medication. This is called post-treatment control. Probably people treated soon after being infected are more likely to receive post-treatment control than people who are treated later. Eventually the viral load always goes up again in post-treatment control people, but this varies from person to person and you never really know when this will happen.

Typ your question in the box below