People with HIV are Being Outlawed

Kerry Thomas is serving a thirty-year prison sentence in the United Stated. All because he did not disclose his HIV status during one sexual contact. For that reason alone, he was sentenced to thirty years. Unimaginable and incomprehensible.

Unfortunately, this is not an isolated case. There are thousands of examples of this kind. This is the brutal reality for people living with HIV in so-called civilized countries like the US and Canada. People living with HIV there are outlawed. They can be wrongfully accused and face arrest. Women are even more likely than men to be sentenced to lengthy imprisonment. This is because women often become aware of their HIV status earlier than men as a result of prenatal testing. This makes them more vulnerable to being labeled as a criminal.

Criminal prosecution is unfortunately possible because of legislation that targets people living with HIV. This kind of legislation has long been known to be counterproductive and bad for public health. Fortunately, the recent report by the Global Commission on HIV and the Law has once again drawn attention to this issue. Laws that criminalize people living with HIV must be abolished. 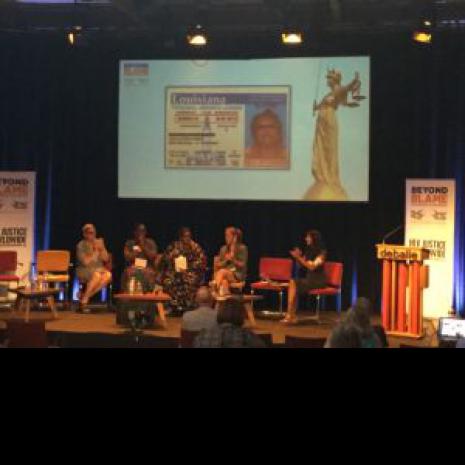 During the meeting “Beyond Blame: Challenging HIV Criminalization” hosted by HIV Justice Worldwide, many speakers tell about their own stories of criminal prosecution. They have been marked for life by their prison sentence. Not least of all because they remain registered for life as “sex offenders.” For the rest of their lives! This makes it impossible to find a job or a home to rent. What kind of world are we living in that something like this is possible?

Chase the Virus, Not the People

Laws of any kind that criminalize people living with HIV must be abolished immediately. Governments as well as courts and others who uphold this system should be ashamed of themselves. It is time that we name and shame them. Laws must be there to protect people, not to prosecute them: “Chase the virus, not the people.”