That’s a good way to describe Wednesday, 25 July 2018. Fortunately, we still have the photos and videos, because what a memorable day it was! Exhausting, exciting, bloody hot, but really incredible to have been a part of it. To make history by walking together for the first leg of the Positive Flame Tour, with the torch that was specially designed for this event. 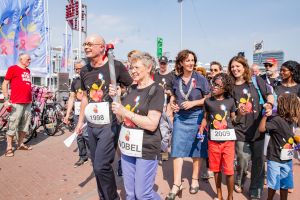 Starting at 4 o’clock in the afternoon at the HIV/AIDS Monument behind Amsterdam Central Station, opened by Femke Halsema, the new mayor of Amsterdam, and Princess Mabel. And lots of people from the press. The torch was lit by American Peter Staley, one of the most important Act Up! activists of the early days and actually one of our “saviors” because he was in part responsible for putting so much pressure on pharmaceutical companies to make medication accessible to everyone who needed it. This really sped up the introduction of combination therapy.

The woman who held the torch as it was lit was Nobel Prize winner Francoise Barré-Sinoussi, the discoverer of the HIV virus. The torch was passed to a woman who was involuntarily tested for HIV in 1984 because she was a drug user at that time. Then came Rob, who was living in Paris in 1985 when he was diagnosed. And then followed one person diagnosed for each year that came after that. My number was 1989, the year I was diagnosed with HIV in Spain after my partner Sebastian was hospitalized with a serious illness and tested positive for HIV. He died in 1990, 33 years young. I was 25 then.

From Memory Lane to Here & Now

We walked past places that were important in the years in which the epidemic broke out in Amsterdam and past Meet & Greets with important partners like professionals in HIV healthcare, the Aidsfonds and GGD (Municipal Health Centers) and other partners in the fight against HIV stigma in the Netherlands and worldwide. Because of the heat, we used rickshaws to cover some parts of the route and received bottles of water, but above all we enjoyed a very pleasant time together. It was a very long day for all the participants, who had to gather around noon in the Global Village to practice for an evening as the backup chorus on stage at the DeLaMar Theater during the Power of Love.

Things took longer than expected, so we tried to speed up by getting in the rickshaws to pick up the pace. It was a unique experience to ride through the Rijksmuseum tunnel in the rickshaws not once, but twice. For me, the highlight of the procession was arriving at Museumplein where the beautiful photos from Marjolein Annegarn’s The Stigma Project are on display, where the Meet & Greet from the Dutch Association of People Living with HIV was, and not only my beloved colleagues and volunteers were waiting for us, but also a couple of Posidivas and my very own daughter. 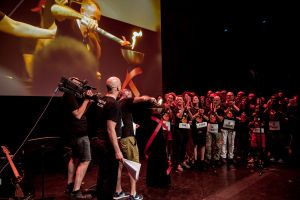 We were escorted inside the DeLaMar Theater through the stage door and stood there among the stage decorations, filled with excitement, waiting for our cue to take the stage. Through the live stream, we saw Lyle carrying the torch from Leidseplein to the theater and then hand it over to Timothy Brown in the foyer, the only man in the world to have been cured of HIV, already 11 years ago. Timothy then brought the torch into the auditorium and lit the flame on stage. 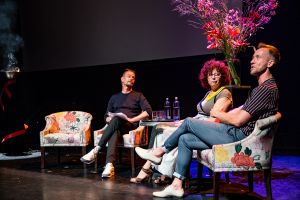 All the torchbearers were standing on stage then. It was so moving to see that whole group standing together. I am so very proud of the women and men who agreed to walk along with us. Women like Gloria, Eliane and Pauline who showed their face and changed the image of HIV in the media. Men who only recently found out that they are living with HIV. Young people who hosted the opening of the preconference with their incredible videos of each other. Old rockers like Marjolijn, Marjolein, Oscar, Rob and, yes, me too. We’re still here. After our appearance together with Perry, Gerben Grimius and I had to change quickly and head for an interview on stage with Leo Schenk and hello gorgeous. I felt the Power of Love from the audience and was able to lay down a powerful, good story. Love gives you wings. From the green room, we did not get to see much of the rest of the program. But fortunately, later we could watch the videos made by Fred Verdult.

We do not have a disease, we have a virus.

In the green room, the atmosphere turned boisterous and rowdy. We were tired after waiting all day and couldn’t follow what was going on in the auditorium. We had no wifi and bad reception, because the green room is in the basement. Someone said it felt like we had all been on a long-haul flight in the same plane and now we were waiting to catch a heavily delayed connecting flight. That’s exactly how it felt. Giggly, happy, extremely tired and, above all, connected with each other. Young Ones and Jong Positief who found each other… The old timers with their off-color jokes from the past… One of the women in the group said, “I am glad to belong to this group of sweet, diverse and proud people.” And I can only wholeheartedly agree with her! Of course, it was a serious occasion and a time of reflection along the route, but at the same time we had a very good time in that crazy group which so perfectly demonstrated the randomness of HIV. All of us did our best to get a word in during the interviews along the way. To quote Oscar Hammerstein: We don’t have a disease, we have a virus. And that’s the truth.