Results of the PARTNER 2 Study at AIDS2018 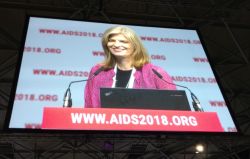 The PARTNER 1 study monitored 888 serodiscordant couples (couples in which one partner is HIV-positive and the other is not) from 2010 to 2014. There were 548 heterosexual and 340 homosexual couples. In total, the couples had sex 58,000 times. No transmission of HIV occurred among the couples. Because the first study included relatively few homosexual couples, the PARTNER 2 study was started.

New Results of the PARTNER 2 Study

During the PARTNER 2 study, 443 homosexual serodiscordant couples were monitored from 2014 to 2018. In total, the couples had sex 77,000 times. This study also found no transmission of HIV among the couples.

As expected, the conclusion of the PARTNER 2 study is that HIV is not sexually transmittable when the viral load is undetectable. Alison Rodger joked that she looked very hard for transmission during the study but really could not find it. Bruce Richman of the U=U campaign closed the event by asking the question of what to do if someone calls U=U into question. Alison Rodger answered: “Undetectable = untransmittable. There are no excuses!”